Auburn is the county seat of Placer County, California.[9] Its population was 13,330 during the 2010 census. Auburn is known for its California Gold Rush history, and is registered as a California Historical Landmark.[10]

The Placer County Courthouse was constructed between 1894 and 1898. 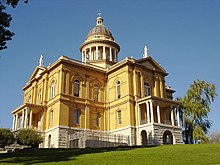 Archaeological finds place the southwestern border for the prehistoric Martis people in the Auburn area.[11] The indigenous Nisenan, an offshoot of the Maidu, were the first to establish a permanent settlement in the Auburn area.

In the spring of 1848, a group of French gold miners arrived and camped in what would later be known as the Auburn Ravine. This group was on its way to the gold fields in Coloma, California, and it included Francois Gendron, Philibert Courteau, and Claude Chana. The young Chana discovered gold on May 16, 1848. After finding the gold deposits in the soil, the trio decided to stay for more prospecting and mining.

Placer mining in the Auburn area was very good, with the camp first becoming known as the North Fork Dry Diggings. This name was changed to the Woods Dry Diggings, after John S. Wood settled down, built a cabin, and started to mine in the ravine. The area soon developed into a mining camp, and it was officially named Auburn in August 1849. By 1850, the town’s population had grown to about 1,500 people, and in 1851, Auburn was chosen as the seat of Placer County. Gold mining operations moved up the ravine to the site of present-day Auburn. In 1865, the Central Pacific Railroad, the western leg of the First Transcontinental Railroad, reached Auburn, as it was being built east from Sacramento toward Ogden, Utah.

The restored Old Town has houses and retail buildings from the middle of the 19th century. The oldest fire station and the Post Office date from the Gold Rush years. Casual gold-mining accessories, as well as American Indian and Chinese artifacts, can also be viewed by visitors at the Placer County Museum. Auburn was the home and birthplace of noted science fiction and fantasy poet and writer Clarke Ashton Smith. A memorial to him is located near Old Town.