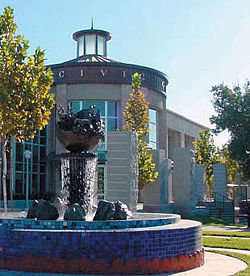 Roseville (formerly, Roseville Junction,[6] Junction,[8] and Grider’s[8]) is the largest city in Placer County, California, United States, located in the Sacramento metropolitan area. As of January 1, 2015 the State Department of Finance estimated the City’s population to be 128,382.[9] Interstate 80 runs through Roseville and State Route 65 runs through part of the northern edge of the City.

The settlement was originally a stage coach station called Griders.[8] According to the Roseville Historical Society,[10] in 1864 the Central Pacific Railroad tracks were constructed eastward from Sacramento, and when they crossed a small California Central Railroad line they named the spot “Junction.” Junction eventually became known as Roseville. In 1909, three years after the Southern Pacific Railroad moved its facilities from Rocklin to Roseville, the town became an incorporated City. What followed was a period of expansion, with the community building more than 100 structures, including what was the largest ice manufacturing plant in the world (Pacific Fruit Express building, in 1913).

The City was a railroad town for decades, with the railroad employing up to 1,225 people by 1929, out of a population of only 6,425 people.[11] With the onset of World War II the rail yards became busier than ever, and the post-war building boom brought continued prosperity. However, the nature of the City changed dramatically in the 1950s.

During the 1950s the railroad continued to expand and upgrade, converting its steam engine fleet to all diesel engines by the end of the decade. However, the railroads began falling in the shadow of air travel and the development of the national Interstate Highway System. Thus, although the railroad remained (and still remains) a major employer, the expansion of the City began branching out into other employment sectors. Another important change during this period was the Washington Boulevard (then called Seawell) railroad underpass construction in 1950. While this improved the ability of people to travel from one side of the tracks to the other, it meant that people were no longer traveling through the Roseville business district north of the tracks. The completion of Interstate 80 in 1956 shifted the population from downtown to what would become known as East Roseville. The old downtown area slid into a gradual decline.

While the character of Roseville has changed over the years, as the City grew from its small-town beginnings to its status as a major urban city today, it has retained some of its historic beginnings. Roseville is no longer a railroad town, but the Union Pacific Railroad is still the 6th largest employer (see Major Employers section, below). Current visitors can now visit the revitalized historic Vernon Street and old Downtown areas which had been in decline for decades, but were recently rehabilitated (see Revitalization section, below).